Is TPS Both a Dessert Topping and a Floor Wax?

“TPS can be applied to any setting, as long as you can define your customer and product…” – Darren Migita MD– Seattle Children’s

Quoted by Jun Nakamuro on LinkedIn from a podcast.

Michel Baudin‘s comments: To be fair, Dr. Migita is a pediatrician with 20 years of experience. His podcast is about adapting TPS to health care, not to “any setting.” It is an interview, a format that can trip up anybody.

What I find remarkable throughout is that Migita does not hide behind the word “Lean.” He explicitly refers to Toyota and Taiichi Ohno and vigorously asserts that you can borrow ideas for car making to improve patient care.

This opening sentence in Jun Nakamuro’s quote, however, makes TPS sound like Shimmer, the product once advertised on Saturday Night Live as “both a dessert topping and a floor wax.” It almost kept me from listening further.

END_OF_DOCUMENT_TOKEN_TO_BE_REPLACED 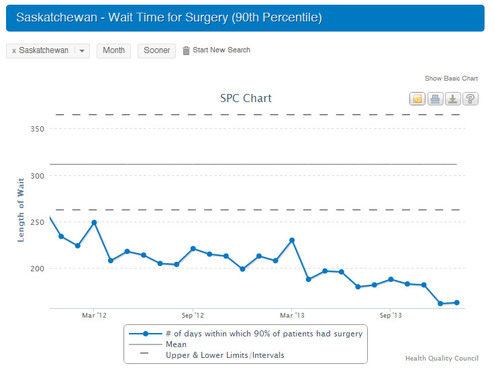 “[…]The government has stated that its kaizan promotion offices do not measure or evaluate lean, and that no reports have been written. At the same time, however, it has stated that lean has already demonstrated benefits. To test this, I reviewed the HQC website – Quality Insight – that has a significant amount of provincial data. For each indicator I will report the first and last month or year where data were collected.[…]”

The article’s author, Mark Lemstra, from The StarPhoenix, claims that Lean yielded no improvement in the financial or medical performance of Saskatchewan’s health care system,  based on data from the Health Quality Council (HQC).

The article’s title is only about “Savings,” but most of the body is about health outcomes and perceptions, and presented through numbers buried in text.

Before taking this article at face value, I recommend checking out the HQC website directly. As in the featured image above, some metrics have clearly improved. Other indicators are flat, like  the willingness of patients to recommend their hospital, or the rate of medical error reports. And some have moved in the wrong direction, such as those related to pain management.

It is perhaps not the rosy pictures that the Lean boosters would like, but neither is it the disaster Lemstra is painting.

Is it Lean’s Fault or the Old Management System’s? | Mark Graban

“[…]The problem is the culture doesn’t change overnight. Leaders have years or decades of old habits (bad habits) that run counter to Lean thinking. They might be (might!) be trying to change, but people will still fall back into old habits, especially when under pressure.

I hear complaints (in recent cases) coming from different provinces in Canada that say things like:

Lean is causing hospitals to be “de-skilled” by replacing nurses with aides. Lean drives a focus on cost and cost cutting, including layoffs or being understaffedLean is stressing out managers by asking them to do more and taking nothing off their plateNurses hate Lean because they aren’t being involved in changes[…]”

In this post, Mark Graban explains how the leadership in Canadian hospitals is slapping the “Lean” label on ancient and counterproductive “cost-cutting” methods, and how the victims of these practices unfairly blame Lean.

This is definitely L.A.M.E., Mark’s apt term for “Lean As Misguidedly Executed,” and is found in Manufacturing as well as Health Care. Much of the article — and of the discussion that follows — is about what I call yoyo staffing: you hire more than you should in boom times, and lay off in recessions.

Of course, it isn’t what Toyota did, and churning your work force in this fashion not only disrupts people’s lives but is bad business. Hiring, training and firing repeatedly prevents your organization from accumulating the knowledge and skills it needs.

Mark makes the case that Lean should not be blamed for mistakes that have nothing to do with it. Other than raising consciousness, however, the post does not propose solutions to keep this from happening.

While there have been studies published on Toyota’s approach to Human Resources (HR), I don’t recall seeing much in the American Lean literature on topics like career planning for production operators.

In his comments, Bob Emiliani paints the current generation of leaders as “a lost cause,” and places his hopes on the next. He seems to suggest that the solution is to wait out or fire the current, baby-boomer leadership and replace it with millenials. I don’t buy it and, deep down, neither does Bob, because he ends by saying “While one always hopes the “next generation will do better”, it could turn out to be a false hope.”

Like everything in HR, generational change has to be planned carefully. The people who rose to leadership positions presumably did so not just because of bad habits but because they also had something of value to offer. And the way the baton is passed is also a message to the incoming leaders: it tells them what to expect when their turn comes.

“Virginia Mason Medical Center in Seattle was the first in the nation to adapt the Toyota Production System as the framework for managing a medical center. We call our version the Virginia Mason Production System (VMPS). It is our management method to identify and eliminate waste and inefficiency in the numerous processes that are part of the healthcare experience.

By streamlining repetitive and low-touch aspects of care delivery, our physicians, nurses and other clinical staff members are freed to spend more time talking with, listening to and treating patients. We are discovering it is possible to provide high-quality care with lower resource utilization.”

This blog post by the CEO of Virginia Mason sheds some light on the specifics of the “Virginia Mason Production System.” He confirms that the focus has been on administrative tasks to allow doctors and nurses to spend more time with patients, rather than on what happens while the doctor or the nurse is with the patient.

What he describes involves breaking down communications and administrative transactions in “small lots,” organizing groups of contiguous rooms into “cells,” and reassigning tasks to better leverage available skills.

Technology is often touted as the cure for many of our modern afflictions.Funny, then, that a whiteboard in the staff room could make such a difference in how the city’s busiest emergency department runs.”It’s very low-tech,” says Jon Schmid, the registered nurse manager for Royal UniversityHospital’s emergency department. “But the impact it has on our organization is huge.”…

The text of the article is informative, particularly about the use of a white board, but the picture does not show this white board. In fact, it seems unrelated to the article, as if the newspaper just slapped on a stock photo from a hospital.

As it is, however, this photo is a good reason for the quotes around the word “Lean.” It is an encyclopedia of work space design mistakes, with work surfaces at uneven and ergonomically inappropriate heights, causing people to stoop, or even squat to access the refrigerator. Not to mention empty space in the center and chairs. 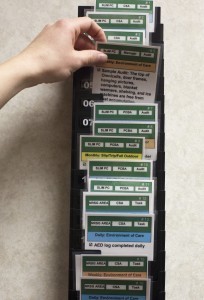 Starting last summer, SLIM embarked on a top-to-bottom examination of how it conducted its work. They wanted to eliminate waste by tapping into the potential and knowledge of every member of the clinic team and build a culture of continuous improvement.

The improvements described are all about supplies and the handling of patients by nurses and administrative staff.

There is not a word about any changes to the work of doctors themselves or involvement by doctors in the improvement process. What form might that take? I don’t know, but, the last industrial engineers to work on health care before Lean were Frank and Lillian Gilbreth 100 years ago, and their focus was the work of surgeons inside operating rooms, not patient handling before and after they see a doctor.

The result of their work was the now standard mode of operation in which the surgeon calls for tools that are handed to him by nurses. It seems hard to believe today but, earlier, surgeons would actually leave patients to fetch tools.

Following in the Gilbreths’ footsteps today would mean for Lean Health Care to get involved with the core of the activity: what doctors do with patients.

In manufacturing, successful Lean implementations start with the work of production on the shop floor, not with the logistics upstream and downstream from production. First you worry about line layout, work station design, and the jobs of production operators. Then you move on to keeping them supplied and shipping their output.