In true Hollywood style, Chrysler Group and the UAW rolled out the red carpet for the Company’s high achievers in manufacturing at the first-ever World Class Manufacturing (WCM) Academy Awards ceremony …”

Awards, and the rituals of presenting them to winners, are a tool of management communication. To give the desired message, you need to think through what you give the awards for, who you give them to, and the mix of tangible and symbolic rewards attached.

Chrysler awards categories are not all self-explanatory, and there some that I just don’t understand. The name of the awards, ETTEE, stands for “Excellence, Talent, Togetherness, Energy, Etc.”

There are no awards under the “Etc.” heading. All the “Talent” awards are given to individuals for “Highest Level of Project Savings.” In other words, the only form of talent recognized is that of individuals to reduce costs.

Under “Excellence,” you have more individual awards for “Trainer of the Year,” “Facilitator of the Year,” and “Most Projects Tracked by an Individual.”

Under “Togetherness,” you have awards for plants and teams: “HHH Best in Class,” “Highest Percentage of People Involved,” and “Excellence in Joint Leadership,”

Under “Energy,” you have plant awards for  “”Highest Percentage of Projects Tracked by Plant, ” and “Most Hosted Plant.” and and individual awards for “Most Training Hours Completed.”

For the “person of the year” type of awards, the name gives no indication of the evaluation criteria, and perceptions of fairness may be as difficult to achieve as in Olympic figure skating.

On the other hand, awards given based on metrics —  like cost savings, percentage of people involved, or number of hours of training taken — have objective criteria that individuals can understand and pursue. The key issue here is whether you really want your employees to do that.

Bodo Wiegand heads the Lean Management Institute, which is the German affiliate of the Lean Enterprise Institute. I just received the latest issue of his newsletter, Wiegand’s Watch, about various means of rewarding employees. I don’t necessarily agree with all his recommendations, and would like to point out a few key points:

Wiegand also discusses travel awards. While it may not be perceived as a reward per se, I believe in sending members of successful Kaizen teams on factory visits. Their eyes have been trained by the Kaizen work, and, as a result, they learn more from these visits than others without this experience. As this is business travel, it does not involve significant others.

The following is a full translation from German of Bodo Wiegands’s  last newsletter,  :

Again and again, I am asked: “What do we do with our suggestion authors? ” or “Should we reward the Lean team? ”

Well, I personally don’t think much of spending money on Lean. I think  identifying and eliminating  waste is the responsibility of each individual and of the teams that work together. On the other hand, incentives can be a strong motivating factor for humans. Why give them up? But  money only has a short -term effect.

For everyone, visible signs of recognition have a much greater effect. It starts with the information board in the entrance , in front of which everybody passes. There, for each team you can show audit smilies or audit results. or the number of  improvement ideas implemented. Sometimes, you see this. But why not use, for example, parking spaces as rewards?

How does that work?

The parking lot is visible to all, and therefore well suited to show awards and recognition . In the parking lot, you can make success visible, in the form of a reserved space next to the General Manager and the name on a small sign — it works.

Travel awards also work – but not as well.

If you award a trip, it should be to the whole team and involve their relevant others . If it is only among the colleagues , it is taken rather badly with the family. But a trip together together with your partner, with sufficient separation from the other team members , will be perceived as an outstanding reward and rated as positive. This , of course, builds up  the pressure  to get it again .

Car rewards can also be a highly effective , but only among employees who have company cars. For this you only need to amend the rules for granting company cars:

The best gets the biggest motor , the second and third best the somewhat smaller and the rest of the “normal” engine for the car class.

Believe me, it will be noticed, not only at work but also at home by the partner and children. And the downgrade to a smaller engine  will also be noticed by the neighbors .

In one company, we have used this to bring the sales in full swing. Because the owner was thrilled by the idea, but expressed concerns  about enforcing this with long-serving employees , we have made a car available to partners – with the same gradations in category,engine performance, and brands.

You can not imagine what happens when, after one year, the partner of the previous sales aces  had to switch from the premium brand to a smaller car. This was visible to all , friends , family, neighbors , etc.

In the first year, this yielded a contribution margin increase of about 20%;  in the next more than 15 %. A resounding success – and the additional costs of the cars for the partners – not worth mentioning . 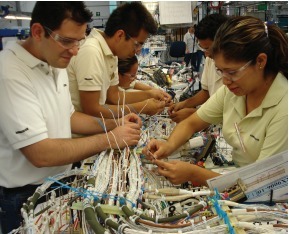 “Recognizing organizations that are implementing lean manufacturing and management processes is one of the highlights of our conference,” says Paul Kuchuris, AME […]

When evaluating Bombardier’s Toronto site, the AME assessment team was impressed by the use of improvement tools, especially with regards to the organization’s approach to Standardized Problem Solving and an empowerment system called Xcell. Combined, these processes drive continuous improvement and engagement by the workforce down to the shop-floor level. Equally impressive to the team was the level of accountability at Bombardier’s Toronto Site and an understanding that the entire organization must change to meet evolving demands and new visions.”

According to this article, the AME recognized Bombardier as having implemented Lean Manufacturing on the basis of having Standardized Problem Solving and an individual suggestion system called Xcell.

Is that it? I have to assume that Bombardier has done a few other things to improve quality, productivity, delivery, safety, and morale, including perhaps designing production lines for flow, reducing setup times, implementing a pull system with heijunka, mistake-proofing manual operations, setting up work teams with job rotations, …

What did they actually do and how well did it work? The article does not say. 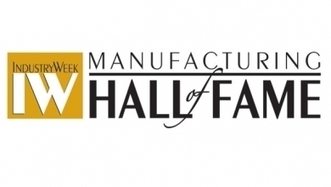 Now in its fourth year, the IW Manufacturing Hall of Fame gives us an opportunity to reflect on what — and who — is most important to the world of manufacturing.

I already posted the citation on Robert W. Hall. This is about the complete list of inductees.

-Honorees have diverse talents and skills, a common commitment to excellence.

A leading multi-brand, multi-channel distributor and retailer of mobile telecommunications devices, accessories and telecom services in the Middle East, Axiom Telecom was recognized for its commitment to customer service and implementation of several globally acclaimed corporate practices such as the Toyota Production System (TPS), 5s, Kaizen, A3 philosophy and customized all of these into its own approach which is the ‘ Axiom Improvement Management System (AIMS)’ program.