Here, we finally start collecting measurements from the video, focusing on what we can collect while watching without stopping. In this mode, we can break down operator time by broad categories like  “Waiting,” “Walking,” or “Assembling,” but we don’t have the time to name each task and collect comments or improvement ideas. This will require a more detailed and time-consuming analysis.

One method, developed by Christophe Caberlon, involves two analysts, one viewing the video and the other one ﬁlling out an electronic spreadsheet. Instead of looking for state-change events in the video, we look at it in 5-second increments. Every ﬁve seconds, the analyst viewing the video calls out the state the operator has been in since the previous call. Each 5-second. Interval is assigned one column in the spreadsheet and there is one row for each state. Based on the call, the second analyst switches the color of the cell for the state and time interval.

Counting in 5-second intervals involves aliasing, but it is not a problem for a rough-cut estimate. The rows in the spreadsheet do show the state transitions in a Gantt-chart like format called “simogram,” and can summarized into proportions of time spent in each state, as in the following example:

This example uses cell background color to express content, which is not generally recommended because Excel does not provide built-in tools either for quick input or for analysis. The result, however, is graphically much more attractive than filling the cells with Xs. Changing the background color of a cell requires multiple steps, which cannot be repeated every five seconds. These steps, however can be recorded as a Macro. In this example, the macro has Ctrl+q as a hot key to mark a cell and Ctrl+w to unmark it. Also, each 5-second time segment must be assigned to one and only one category. When working your way through a video, it is impossible to avoid cases where one segment will be missed and another accidentally assigned to more than one category.

This method is also restricted in the number of states to track. It is feasible for two or three but not ﬁfteen. With the limited number of choices, it is a good idea to include an “Other” state. The states should also be clear and unambiguous, such as:

Categories that are abstract and subject to interpretation, like “Value-added” should be avoided. Note also that an operator who is Working or Touching, may be handling the work piece or transforming it, and we don’t have enough categories at this level to make the difference.

Timer Pro provides a method called “Non-stop timing,” in which the analyst simply clicks on a category when observing a state transition, and the time since the previous click is automatically assigned to this category. This eliminates the aliasing due to using 5-second intervals, and relieves one analyst from the task of clicking the right spreadsheet cell every 5 seconds.

Following are a few recommendations on the art of taking shop floor videos:

A #Lean Look at the #Baseball Jersey Manufacturing Process 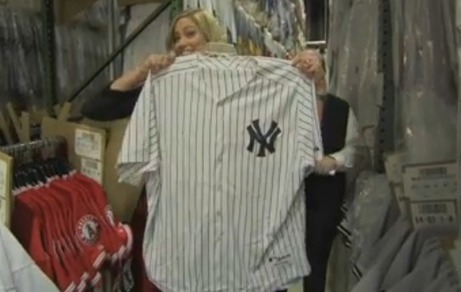 Insightful comments. Keep it up.

The adoption of video technology in the improvement of manufacturing operations proceeds at a glacial pace. A recent article from the Financial Times describes the application of video analysis developed for sports to motion studies in manufacturing.

Via Scoop.it – lean manufacturing
Dave Westphal’s 13-year-old daughter, Rachel, is a competitive figure skater. She is also the inspiration for a manufacturing improvement initiative at Nexteer Automotive, a leading US-based maker of steering and driveline systems for the car industry, where her father is director of lean manufacturing.
Via www.ft.com (You have to register on the Financial Times site to retrieve it, but a free registration will do.)

Video technology is now so pervasive that it is nearly impossible to buy a phone that does not include a camera capable or recording footage that is good enough for broadcast news. Journalists use amateur videos to show storm damage or expose human brutality. We use it to identify improvement opportunities in business operations.

Motion pictures have a long history in manufacturing:

As is obvious from watching the Gilbreth films, where Taylor measured in order to control, the Gilbreths observed in order to improve. Taylor’s greater fame or notoriety, however, obscured this fundamental difference in the public mind, and made workers as wary of cameras as of stopwatches.

According to psychologist Arlie Belliveau,”The Gilbreths used workers’ interest in film to their advantage, and encouraged employees to participate in the production and study of work through film. Participants could learn to use the equipment, star in a film, and evaluate any resulting changes to work practices by viewing the projected films in the labs or at foremen’s meetings. Time measurements were made public, and decisions regarding best methods were negotiated. By engaging the workers as participants, the Gilbreths overcame some of the doubt that followed Taylor’s time studies.” In other words, these pioneers already understood that, unlike the stopwatch, this technology enabled the operators to participate in the analysis and improvement of their own operations.

Until recently, however, the process of recording motion was too cumbersome and expensive, and required too much skill, to be massively practiced either in manufacturing or in other types of business operations. In addition, most managements failed to use it in as enlightened a way as the Gilbreths, and manufacturing workers had a frequently well-founded fear that recordings would be used against them. As a consequence, they were less than enthusiastic in their support of such efforts.
Setup time reduction is probably the first type of project in which it was systematically used, first because the high stakes justified the cost, even in the 1950s and second because its objective was clearly to make drastic changes in activities that were not production and not to nibble a few seconds out of a repetitive task by pressuring a worker to move faster.

Technically, the cost of shooting videos has not been an issue since the advent of the VCR in the 1980s. Analyzing a video by moving forward and backwards on a cassette tape, while it appears cumbersome today, was far easier than dealing with film. The collection of data on electronic spreadsheets also eliminated the need to use counterintuitive time units like “decimal minutes.” Adding columns of times in hours, minutes and seconds was impractical manually but not a problem for the electronic spreadsheet.

With videos now recorded on and played back from flash memory, and free media-players as software, not only is moving back and forth in a video recording is easier, but the software maps video frames to the time elapsed since the beginning. We could manually transfer timestamps read from the bottom of the video player software window into electronic spreadsheets and have the spreadsheet software automatically calculate task times as the differences between consecutive timestamps.

While this approach has been a common practice for the past 15 years, video annotation software is available today, which helps break down the video into segments for steps, label them, categorize them, and analyze them.
You can also use it to structure the data and generate a variety of analytics to drive improvements or document the improved process through, for example, work instructions. Over the previous approach, video annotation has the following advantages:

“Video time studies” is too restrictive a name for what we do with videos. It implies that they are just a replacement for a stopwatch in setting time standards. But what we really do with videos is analyze processes for the purpose of improving them, and this involves more than just capturing times. The primary pupose of the measurements is to quantify the improvement potential to justify changes, and to validate that they have actually occurred.

Putting this technology to use is not without challenges. Video files are larger than just about any other type we may use, be they rich text, databases, or photographs. And they come in a variety of formats and compression methods that make the old VHS versus Betamax dilemma of the VCR age look simple. More standardization would help, and will eventually come but, in the meantime, we have to learn more than we want to know about these issues. Functionally, the next technical challenge is the organization of libraries or databases for storage and retrieval of data captured in the form of videos. The human issues of video recording and analysis of business operations, on the other hand, remain as thorny as ever.