The Lowdown on Lean Accounting

Lufthansa’s Tim Heppenheimer asked about it in the TPS Principles and Practice discussion group on LinkedIn. The following is the responses I posted, with a few links and illustrations added. The topics covered are as follows:

When applying Lean to any support activity, we must consider separately the impact on effectiveness and efficiency. Ram’s comment on “eliminating redundant activity, streamlining work processes,…” addresses the efficiency of the accounting department’s internal operations.

Instead, what Lean Accounting is primarily about is the effectiveness of the accounting function in supporting the business. It is about the nature of the services provided, and it only concerns management accounting — that is, the numbers that are intended to provide management with information on the effects of its actions.

Accounting also has to provide reports to external stakeholders in formats and with contents that are mandated. It is a game of using the rules to make the company appear simultaneously poor/struggling to tax authorities, and rich/successful to investors. But these numbers do not tell a plant manager how he or she is doing.

Background on Management Accounting in the US

In this as in many other areas, the practices that are standard today are relics of an era in which the work of manufacturing was more manual than it is today and data processing was manual. 100 years ago, for example, unit costs for manufactured products were tallied on paper spreadsheets and comprised of materials, labor, and overhead, with overhead being allocated to products in proportion to the labor consumed in making them.

Today, every high schooler carries more computing power than the J.P. Morgan bank had in 1900, and a steel mill uses barely 1/10 of the labor it required just 50 years ago to support the same volume of production.  It spends about ten times more on overhead than on direct labor, and allocating this  gigantic overhead to products based on a tiny labor content has been recognized as unnecessarily simplistic in the management accounting literature for decades, yet it dies hard in factories.

For at least 150 years, the most advanced work in management accounting has been done in the US. As Alfred Chandler tells the story, in the 19th century, accountants defined business-specific metrics — like “cost per ton-mile” for railroads — that are useful for companies focused on only one business. Today’s airlines, for example, use “revenue passenger miles.” Later, diversified companies needed generic tools to compare divisions engaged in different businesses, leading 100 years ago to a system of ratios like Return on Assets or Return on Investment, developed at DuPont and still in use today. 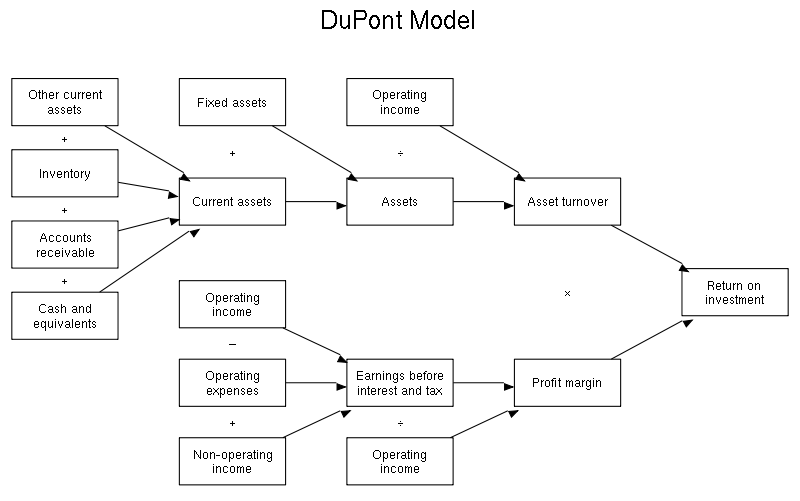 Alfred P. Sloan implemented the DuPont model at GM in the 1920s, and it is credited in part with the company’s success in competing with Ford, where nothing of the kind was done until the post-World War II “Whiz Kids” era. The vocabulary of the DuPont model now permeates business,  and is often used incorrectly. Just about Return On Investment (ROI), I recently saw the following two statements:

American management’s love affair with these tools culminated in the 1950s, when executives from the financial side took over control of large corporations like GM and Ford, and managed them like car drivers who keep their eyes on the instrument panel rather than the road. In the 1953 movie Executive Suite, the R&D manager and the chief accountant of a furniture manufacturers compete for the job of CEO in a board meeting. In the movie, the R&D manager wins over the directors with a passionate speech about products, quality, and pride in workmanship; in real life, on the other hand, the accountants won.

By the 1980s, the problems this caused were obvious, and critics raised their voices. Harvard’s Robert Kaplan explained how management accounting had lost its relevance, and Eli Goldratt denounced accounting as the “number one enemy of productivity.” As improvements, Kaplan proposed Activity-Based Costing; Goldratt, throughput accounting.

In the 1990s, as Lean was gaining traction in the US, authors like Brian Maskell, Orrie Fiume and Jean Cunningham proposed various ideas under the label of “Lean Accounting.” I see Maskell as focusing on accounting for “Value Streams,” while Fiume and Cunningham emphasize reports that managers can understand without special training and that do not mislead them.

Remarkably, none of this came out of Japan. The message I get from the TPS literature is that we should not pay too much attention to management accounting. Taiichi Ohno, for examples says “Costs do not exist to be calculated. Costs exist to be reduced.” Literally, it makes no sense. Costs are numbers, intended to quantify the consumption of resources for the purpose of supporting decisions. What Ohno is really saying is that we should not spend too much effort at getting the numbers “right,” but should instead focus on bringing them down.

In “Toyota Management System,” Yasuhiro Monden does not discuss management accounting as a function. He does have a chapter on Target Costing and Kaizen Costing, which, consistent with Ohno’s recommendation, covers how costs are used in managing the business but not how they are calculated. There is nothing, for example, on overhead allocation or on the handling of depreciation, that are at the core of management accounting in the US.

A 1988 article by Toshiro Hiromoto in the Harvard Business Review about Japanese Management Accounting extols it as “another hidden edge.” In particular, he thought it was a great idea for Hitachi to use management accounting as a tool to drive the implementation of its strategy. The example he quotes has the system apply overhead surcharges to products that use nonstandard components, as a means of discouraging this practice.

But it seems more like a misunderstanding of the whole point of management accounting, which is  provide objective information for management to set strategy. It is not intended to be an implementation tool. The article begs the question of what information Hitachi’s managers had used to determine that eliminating non-standard components was a strategy they should pursue.

The bottom line on Lean Accounting is that it is an approach developed in the US and not based on Toyota’s practices. It doesn’t mean there is anything wrong with it, only that it must be judged on its own merits and not presented as part of TPS.

The Economics of Lean

This is a broad subject that deserves more than a few sentences. Most attempts at quantifying the financial benefits of a successful Lean implementation are mistakenly focused on cost savings. For example, the point of quick setups is not to save costs but to enhance flexibility, which makes the company more attractive to customers.

You do many things to increase sales. You advertise, you sign up more distributors or dealers, you adjust prices, and you improve your manufacturing performance. Some of these actions may be effective and others not, and it is not easy to know which ones. Even when you know an action helps, you often cannot separate its impact from others’.

For example, if you advertise that you can deliver any custom configuration of your product in 5 days anywhere in the US, and sales go up by 15%, you know the market responded. But you still don’t know how much of the response was specifically due to the content of your message as opposed to the artistry of its presentation, or even just the amount you spent on advertising.

Focusing instead on cost savings may be easier, especially for accountants, but it is largely irrelevant.