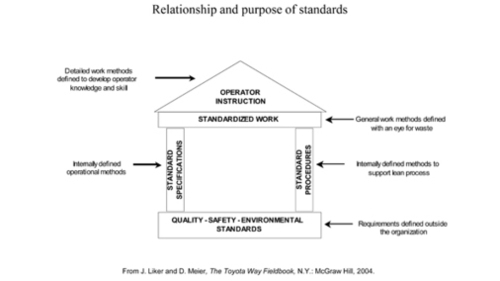 “As an undergraduate engineering student I spent a term in the offices of a nuclear power company writing standards. I sat at a desk, with a typewriter, and nuclear engineers fed me information while I wrote the standards. Standard 300.47.3.1. I had never been to a nuclear power site and had no idea what I was writing about, and I am pretty certain nobody at the site had memorized the tens of thousands of standards. They were aimed at the Nuclear Regulatory Commission who audited the company so we could prove we were safe. To the best of my knowledge pieces of paper never prevented a nuclear crisis.”

Jeffrey Liker chimes in on the issue of standards. While efforts to clear up the confusion on this topic in the context of Lean are praiseworthy, I think the terminology of “Standardized Work,” and “Work Standards” itself is hopeless.

Every author uses them differently, there is no hope of achieving consistency, and the word “standard” comes with too much undesirable cultural baggage, as illustrated by Jeffrey’s anecdote quoted above. As a result, every discussion of this topic is Tower-of-Babel project review.

Just because Toyota in the US uses terms doesn’t mean we have to, as they often are mistranslations of its own, Japanese terms, which themselves are not necessarily clear.

That’s why I prefer to talk about “work combos” for specifying how different tasks performed at different stations are combined into an operator job that fills the takt time, and “work instructions” for the breakdown of each task into steps with key points.

Then we can reserve the word “standard” for external mandates and internally generated rules and protocols used, for example, in quality problem-solving with suppliers.