Lean is from Toyota, not Ford, and not 15th-century Venice boat builders

Anywhere but possibly inside Japan, finding local roots for Lean is useful to defuse nationalism when implementing it, but it is also risky. You start by giving a local pioneer credit for what he actually did. Similarity of his insights with Lean then becomes enough to label him a “precursor.”  It may be a stretch, but it is a white lie, and it makes local engineers and managers so much more receptive! Further down this slippery slope, however, the local precursor becomes a “pioneer” and soon there is nothing to Lean beyond what he came up with, at which point his legacy impedes Lean  implementation more than it supports it. This is where Lean is attributed to Henry Ford.

In reality, while the founders of Toyota learned everything they could from foreign sources in early days, they and their successors are the ones who put the Toyota Production System (TPS) together and made it work, before the term “Lean Manufacturing” was coined. A Toyota alumnus told me that he never heard Toyota people claim they had invented anything; after all, they are in the car business, not the production system business. What is unique about their work is that they have integrated all the pieces — borrowed or not — into a system that outperformed the competition. As part of its 75th anniversary celebration, Toyota published the following illustration of its overall system:

They also published a detailed timeline of the development of TPS  from 1945 to 2005, highlighting the key challenges the company faced in each period, and the solutions it adopted in Just-In-Time and Jidoka. Each item has a short explanation in text, and is illustrated with cartoons, technical drawings, and photographs. It is an excellent and balanced account of the technical content of TPS, and I recommend going through it to understand how the pieces fit together.

Based on this timeline, other details contained in the 75th anniversary website, and a few other sources, I compiled the following summary, going back further in time, and emphasizing international exchanges. What I find most striking about this timeline is that the foreign inputs to TPS, primarily from the US and secondarily from Germany, were over by the mid 1950s, almost 60 years ago, and that, since the late 1970s, the flow is in the opposite direction, with the rest of world learning from Toyota. 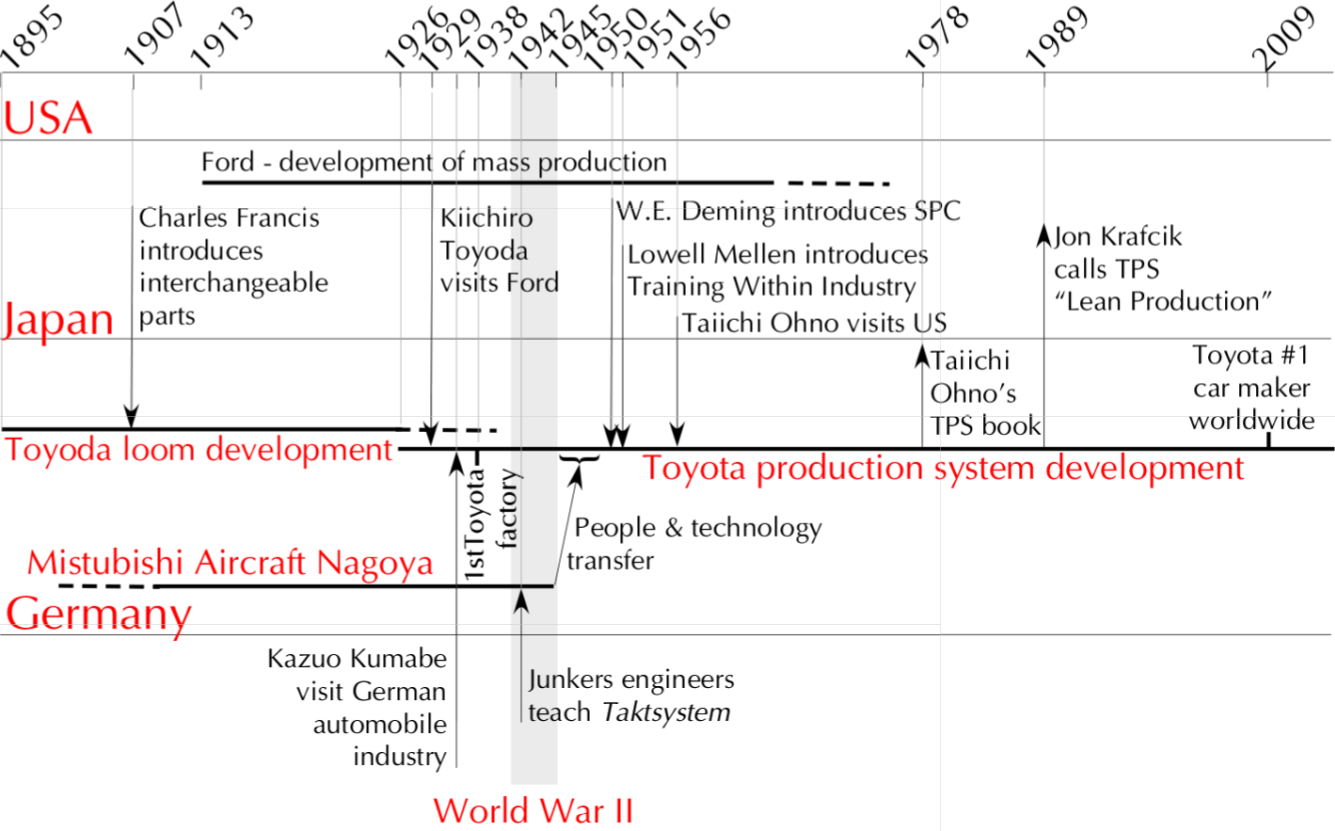 TPS is still a work in progress. It has been and still is primarily an original development. The bulk of TPS has come from the minds of inventor Sakichi Toyoda, his son Kiichiro, engineers Taiichi Ohno and Shigeo Shingo, and hundreds of thousands of Toyota employees over decades. A trade secret until Toyota started training suppliers in the 1970s, TPS was revealed to the world with the publication of Taiichi Ohno’s book in 1978.

The American influence, particularly Ford’s, is readily acknowledged and played up in Toyota’s official literature. The German contribution, while not hidden, is in small print. Takt  is a central concept in TPS, and it came to Toyota from the Mitsubishi Aircraft plant in Nagoya, which had learned it from German aircraft manufacturer Junkers. After the subject of Takt came up in a LinkedIn forum a few months ago, I pulled on this linguistic thread to see what came out, and I was surprised by the magnitude of it, essentially a whole production system for aircraft, including some principles of supply chain management. It is summarized in the following blog posts:

Why Toyota designers chose to imitate this particular car at that particular time is another mystery, but not relevant to the key point here, which is that all of this borrowing from abroad is ancient history.