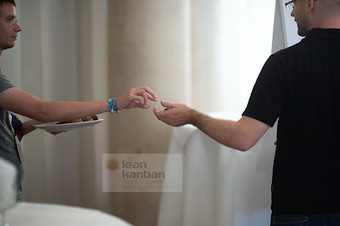 An approach to improving the experience of using a buffet that relies on capping the number of people with concurrent access. It is like the nightclub or museum management system in which a fixed number of visitors is allowed in, and the next one only allowed in when one leaves.

This is in the same spirit as the purely production control approach to Lean, in which you change production planning and scheduling but you don’t redesign the production line itself. For pointers on buffet design, see Waiting For Each Other.

Waiting for each other

We have all seen the absurd situation in the featured picture above of a line of customers waiting for taxis while a line of taxis next to them is waiting for customers, with a barrier separating them. This particular instance is from The Hopeful Traveler blog. The cabs are from London, but the same scene could have been shot in many other major world cities.

I am sure we have all encountered similar situations in other circumstances, which may or may not be easy to resolve. One particular case where it should be easy is the restaurant buffet. Figure 1 shows a typical scene in buffet restaurants, with a line of people waiting to get food all on the one side of the table, while food is waiting and accessible on the opposite side.

I think the fundamental mistake is the assumption that a buffet is like an assembly line, providing sequential access to dishes. This means that you cannot get to the Alo Gobi until the person in front of you is done with the Tandoori.  The ideal buffet would instead provide random access, meaning that each customer would have immediate access to all dishes at all times. While it may not be feasible, you can get much closer to it than with the linear buffet. The following picture shows an alternative organization of a buffet in circular islands that is non-sequential.

Figure 2. A buffet island at the Holiday Inn in Visalia, CA

The limitation of this concept is that replenishment by waiters can interfere with customers. To avoid this, you would want dishes to be replenished from inside the circle while customers help themselves on the outside, as in the following sketch:

Figure 3. A buffet island with replenishment from inside

One problem with the circular buffet island, however, is its lack of modularity. You can add or remove whole  islands but you cannot expand or shrink an island, which you can if you use straight tables arranged in a U-shape, as in Figure 4.

This buffet island may superficially look like a manufacturing cell, but it is radically different. Its purpose is random access to food as opposed to sequential processing of work pieces, and the materials do not flow around the cell but from the inside out.

Such are the thoughts going through my mind while munching on the Naan at Darbar.