“The company-specific production system (XPS) of Chrysler is the World Class Manufacturing (WCM) concept, developed by the Fiat Group in 2006. But, what exactly is the WCM? And, what does Chrysler see as keys to success in WCM?

A few answers are given these days at the 4th annual Lean Management Journal Conference in Birmingham, UK: in his morning keynote, Mauro Pino—Vice President for vehicle assembly operations and the Head of World Class Manufacturing in the Chrysler Group—explains how Chrysler “achieves manufacturing excellence across the globe”. Pino stresses that “WCM is how we do our business. Period.” The presentation reminds me of the WCM factories I visited in Brazil, Spain and Sweden last year, all of which confirmed that WCM can be a powerful improvement system—if implemented seriously. Let’s take a closer look at the concept of WCM.” END_OF_DOCUMENT_TOKEN_TO_BE_REPLACED 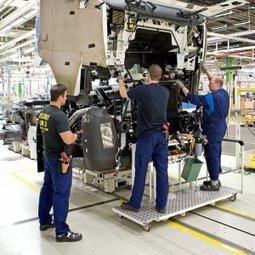 “We studied the implementation of the Volvo Production System, or VPS. The Volvo Group, based outside Gothenburg, Sweden, is a leading manufacturer of heavy vehicles, such as trucks, buses and construction equipment. (The company sold its Volvo Cars unit in 1999.) The Volvo Group introduced the VPS in 2007, and since then, it has been implementing the VPS in its 67 factories, located in countries around the world. VPS is similar to lean production systems used in many other companies, and we believe the insights from this study can be usefully applied in other companies. We examined the five-year history of this program, visited 44 of the 67 plants and interviewed 200 managers.”

The first author of this article, Torbjørn Netland, is among my favorite bloggers. You can rely on him for good, clear-headed writing based on research. And this article delivers, as expected, but not what its title says. It’s not about corporate Lean programs in general, but all about the case of Volvo. Since I have not seen this kind of disconnect on Torbjørn’s blog, I suspect the title was selected by editors at the Sloan Management Review to broaden its appeal.

A general issue that is not addressed in the article is the level of knowledge of Lean in corporate Lean programs. A company that is just starting in Lean, by definition, has no internal expertise to draw on. If it wants its Lean program to be led by experts, it has to hire them from the outside, which is problematic in two ways:

The alternative is to appoint insiders and expect them to learn. But then it has to be understood that they are not in a position to prescribe what plants should do, and that their role should instead be one of facilitation, coordination, and cross-pollination of ideas between plants.

Often, corporate Lean groups are overeager to standardize the approach across all plants — regardless of what they make or the business and social environment in which they operate.

If they don’t want to turn the Lean program into a exercise in formal compliance, they can instead, for example, on organize periodic conferences  where representatives from different plants present their work. They can also arrange for these conferences to be hosted in turns at the different plants and include shop floor visits. And this can be supplemented by various forms of knowledge sharing on the company’s intranet…

There is nothing wrong with collecting the best practices from different plants into a corporate standard, once the different plants have had the opportunity to develop these practices. But if you do it too early, all you do is stifle the creativity that you need for this purpose.