Philip Marris told me of the case of a machining cell in an auto parts plant where management was ready to buy more machines because it was “lacking capacity,” but he was able to find a cheaper way to increase capacity by 17% in 15 minutes.

Unlike manual assembly cells, in which work can be balanced among stations, cells that involve machines always have one that is slower than all others, and, reallocating work among machines with different capabilities is not an option. In particular, almost all machining cells have a bottleneck, and the situation Philip described involved this bottleneck and the machine feeding it. The cell practiced one-piece flow. Therefore, if the feeder machine had worked perfectly, the timelines of the Feeder and the Bottleneck would have been as follows:

But what Philip discovered by observing operations was that the Feeder had microstoppages.  When the Feeder was hit by a microstoppage, the delay it caused passed to the bottleneck, which was prevented from working 100% of the time, as shown below:

To anyone trained in Lean, the only appropriate solution was to eliminate the microstoppages… But it was easier said than done. Sometimes, all it takes is slowing down the machine, or changing a maintenance policy from “clean for one minute” to “clean until it is clean.” But it is not always that simple.

Microstoppages are often unreported because they are fixed on the fly by production operators. To understand microstoppages, you need to monitor the machine to observe when they occur and trace their causes. Eliminating them may require you to modify chutes, fixtures, jigs or dies, or even the basic process, and it can take time, but you need to do it if you want one-piece flow to work.

In the meantime, what do you do? Buying more equipment is an expensive solution, especially when you don’t expect to need it once you are rid of the microstoppages. A cheaper countermeasure is to protect the supply of parts to the bottleneck against fluctuations by decoupling the two machines with a buffer of WIP. You can set the size of this buffer by trial and error,  knowing that it is not a long-term solution.

Of course, manufacturing engineers understand that you cannot have one-piece flow with microstoppages. So why did they ignore their own wisdom? The most likely explanation is a demand from a corporate “Lean group” to implement one-piece flow everywhere and “damn the torpedoes!” These engineers had complied not because they thought it was a good idea, but because it was required to keep their jobs.

Technically, Philip sees this story as a case study in the addition of Theory of Constraints (TOC) thinking to Lean; I just see it as due consideration of equipment issues in cell design, as I was taught it more than 25 years ago. From a management standpoint, I see it as an example of the local consequences of half-baked corporate mandates. 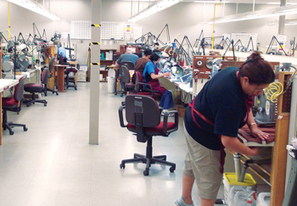 How Stuller’s development of continuous-flow work cells using a lean manufacturing approach is helping the company compete in the U.S.

The words in the article are great, but the picture does not match. This looks like traditional workbench manufacturing, not Lean cells!

As Crocodile Dundee would have said, that‘s not a cell, this is a cell:

This one is in machining. For assembly, I don’t have as good a video, but this is picture of an assembly cell for small parts: