“Inside Toyota Motor Corp.’s oldest plant, there’s a corner where humans have taken over from robots in thwacking glowing lumps of metal into crankshafts. This is Mitsuru Kawai’s vision of the future…”

According to the article, Toyota’s management feels that maintaining the know-how to make parts manually is essential to be able to improve automated processes.

“…Automation has long been a central tenet of lean.  It is in the automation versus labor cost issue where conflict arises.  Toyota spends a lot of time thinking about and working on jidoka – automation with a human touch.  In a nutshell, it means investing in automation to enhance human capability, rather than replace it…”

One of the rare articles in English where Toyota’s jidoka is accurately portrayed as a complete — and effective — automation strategy, rather than reduced to the notion of machines that stop when they malfunction. As Bill recognizes, there is more to it than that.

What is Karakuri Kaizen?

Google “Karakuri Kaizen,” and you see a small number of Youtube videos from Japan, Thailand, Italy, and Hong Kong showcasing materials handling devices that rely on gravity, levers, cams and inertia to move bins in elaborate ways, transfer parts between machines, or deliver a controlled number of small parts to an operator’s hand.

Here is one from Japan’s JMAC with multiple examples:

Such devices have long been used as part of TPS and Lean, but now we have a generic name for them. The principles of Karakuri Kaizen given at the end of this video are as follows:

While “Karakuri Kaizen” is an alliteration that rolls of the tongue almost as easily as “cash for clunkers” or “toys for tots,” you may still wonder where “Karakuri” comes from and what it means. Until “Karakuri Kaizen,” I had never heard it stand-alone but always as part of “Karakuri Ningyo,” or Karakuri Dolls, which are wind-up automata with wooden gears and levers developed at toys in 18th-century Japan. The best known are tea-serving dolls, like the one in the featured image.

As Karakuri dolls are a reminder of ancient ingenuity, the term has a positive connotation in Japan. I once used a picture of one in a magazine ad for US-made automation software, to connect the product with the local culture. But the term, obviously, means nothing to anybody who is not Japanese.

It was a single thread that gave a man a dream, created a little history and displayed the talents of a remarkable mind and a family with resourcefulness in its genes.

Sakichi Toyoda wasn’t all that interested in fast-moving machinery, just machines in motion. It’s how the Toyota Production System began. It’s how an inventor with a sharp eye and even sharper mind built an empire…

A summary of Toyota history with the usual omissions:

This article from Industry Week suggests that for Toyota to use high technology in Manufacturing is something new or a departure from its traditional system. It presents the Assembly Line Control (ALC) system as something new, when it has been in existence since at least the early 1990s.

We should not forget that even Ohno described jidoka as one of the two pillars of the Toyota Production System, on a par with Just-in-Time, and that jidoka means “automation with a human touch,” or “autonomation.”

The English-language literature often reduces jidoka to making machines stop when they malfunction, but the actual jidoka includes a complete automation strategy, with sequences of steps to automate both fabrication and assembly operations, as well as an approach to managing the interactions between humans and machines on a manufacturing shop floor.

This is what I wrote about in Working with Machines.

Is there a “DIY” AGV in your future? – DC Velocity 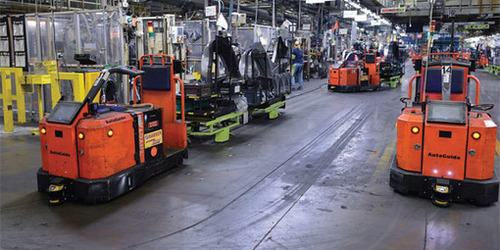 This is what jidoka/autonomation is about! Contrary to what you read in the reductionist literature, jidoka is not just about stopping machines when they start to malfunction. It is instead a complete and intelligent approach to automation.